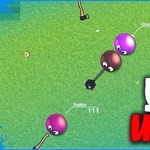 Balloons.io is an online game that you can play for free on friv io games. Because it is the io game, you have a chance to play with many players around the world. Before starting fighting, name and customize your character by choosing the emotional eye such as surprising emotion, happy or angry emotion and the skin color like orange, yellow, green, blue, and so on.

Get ready to take part in the battlefield? Let’s go! You are armed with just a knife in the beginning. Move around this land and find other players, kill them to earn coins. Besides, you can see the coins as well as the gold bags on the ground to enhance your budget. Then, this money can help you upgrade your weapons in friv free games such as the fire gun, the hammer, the sword and so on.

You attack enemies by popping their balloons, but you also have to be careful with their weapons. Try to avoid them, if they touch you, you will be explosive and lose the game and the result is cleared. In addition to this, you can use your gold to boost your speed to catch other balloons faster. Attempt to survive as long as you can to gain the highest scores.

We are so thankful to receive your comments and voting. Introduce the game to your buddies to take part in the battle together. Play more similar games like Sworm .Io and Skate Hooligans at http://www.frivclassic.net/.

Move your mouse to change your move direction and use the left click to boost your speed.