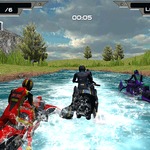 Water Scooter Mania 2 is the epic game following up on the original Water Scooter Mania title that captivated so many gamers. The second version brings you more choices of modern vehicles and you also have a chance to compete with many gamers around the world. This game is playable on friv racing games for free.

You possess a water scooter and race through a myriad of exciting new tracks. You also have many selections of the character such as Scorpion, Shockwave, Storm, Typhoon and so on but only the first one is free, the others need to be unlocked as you complete a certain number of levels. There are 6 competitors and 2 laps in each track in friv online games. Besides, the game counts your playing time, it means you will gain the bonus coins for the shortest time.

The track has the windings, watch out to turn at the right time. Try your best to be the first person who reaches the goal in each lap to win the level. Attempt to unlock many interesting new laps. In addition to this, don't forget to use your nitro boost to give you an advantage over the other player's. Collect the gold coins and the nitro on the way!

Attempt to become a water scooter champion and conquer other players from around the world!

Your rating and comments are welcomed warmly. Please invite your friends to play the game together. Many exciting games are waiting for you on http://www.frivclassic.net/ like Tricky Motorbike Stunt 3d and Outgun.io.

Use WASD or arrow keys to drive, Spacebar to brake, P to pause, and R to reset.