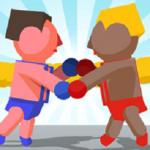 Wrestling is not only about using the strongest force to defeat the opponent. It's also about maintaining the strength and position for a long time and use the smart strategy. In Wrestle Up, you will learn tips and tricks from Friv online game for a long wresting match. This is a fantastic physics-based wrestling game that you can enjoy with your best friend thanks to the two-player action. Or just go with the single-player mode and find out the technique that AI usually uses.

With dual keyboard controls, both players can freely control their character without affecting the other. The goal is to use several move combinations of moving, kicking and punching to knock your opponent out of the ring. It's the usually rule for a wrestling match, but this game at http://www.frivclassic.net/ is not usual at all! Not only do you need to defeat the other player but you also have to overcome the physics effect. If you manage to withhold longer, probably you will be the ultimate winner!

The fun part is that the game also consists of constantly growing wrestlers the longer you survive on the ring. The graphics and characters designs are also incredibly cute with blocky wrestlers and smooth transition from scene to scene. Can you use your wrestling ability wisely? More fighting games for two players that you can also play are Boxing Fighter Shadow Battle and Table Tennis Pro